Strategies to boost recovery from exercise – are they effective?

These activities are often used with the aim of reducing muscle soreness and stiffness and restoring performance more quickly after exercise. A common belief is that recovery strategies will also help to prevent injuries. Theoretically, improved recovery from exercise could improve performance during future training sessions, leading to improved exercise adaptations over time.

Figure 1: Ice baths are one of several strategies commonly used to boost recovery from exercise.

While many recovery strategies lack a solid evidence base for their proposed effects, some may have benefits for certain aspects of recovery, such as reducing muscle soreness/stiffness and restoring aspects of sports performance. Some recovery strategies may also have psychological benefits, such as improved perceived recovery and wellness. But it’s also important to recognise that recovery strategies can have negative effects in some circumstances, which may limit certain benefits associated with exercise.

In this article, you’ll learn more about common exercise recovery strategies, how they are proposed to work, and whether they can improve aspects of recovery or reduce injuries.

Exercise places various demands upon the body. These demands – or physiological stressors – include the depletion of metabolic fuels (such as carbohydrates or fats) that power muscle contraction or the mechanical forces experienced by muscle fibres during activities such as running, jumping, or lifting weights.

While these stressors promote many of the long-term benefits of exercise, they can also have some unfavourable short-term effects, such as increased fatigue, muscle soreness and stiffness, and decreases in performance.

The term ‘recovery’ may be defined by the changes in these parameters following the exercise.

For example, imagine performing a Wingate test on a cycle ergometer (a 30-second sprint pedalling as hard and as fast as possible).

This test is very fatiguing, so your performance will be decreased for some time after completing the test. You may also experience increases in muscle soreness and stiffness in the days following the test. However, we know that other forms of exercise (such as running or resistance exercise) are more likely to leave muscles sore and stiff.

Despite this, we know that if we allow enough time after completing the test, the effect on your performance will no longer be noticeable and may even be improved.

The question is, can we employ any strategies to improve recovery and return performance to – or even above – previous levels more quickly after exercise?

Common recovery strategies – what are they, how do they work, and are they effective?

You may have heard of some strategies commonly suggested to improve recovery from exercise.

These strategies are generally believed to reduce fatigue, muscle soreness, or stiffness after exercise, and/or restore performance more quickly.

Theoretically, improved recovery from exercise can benefit performance in future exercise sessions, which, over time, may boost exercise adaptations.

So what are some of the common recovery strategies, how do they work, and are they effective? 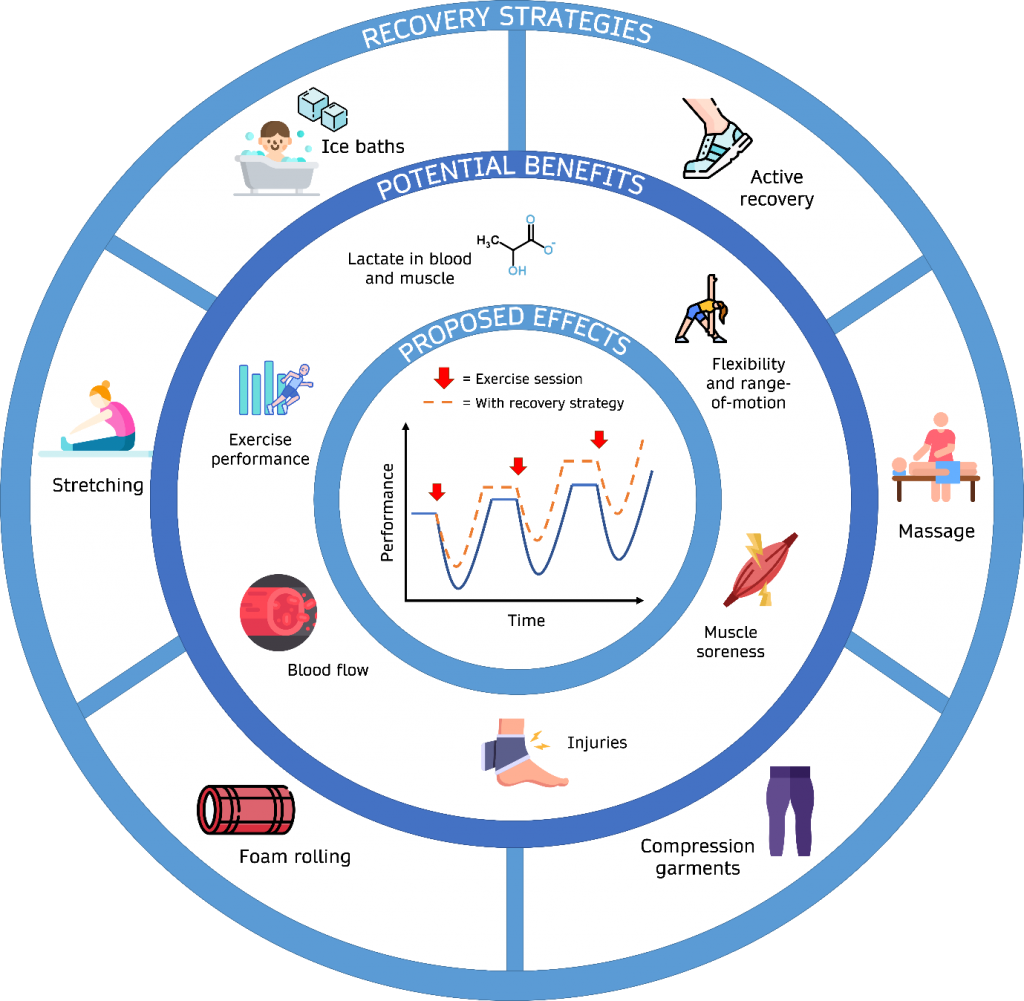 Ice baths – also known as cold water immersion (or CWI) – involve placing the limbs and/or the torso in water cooled to temperatures of between 8-15° Celcius.

This is typically performed for 10-20 minutes after completing an exercise session or competitive match.

Vasoconstriction and hydrostatic pressure have various physiological effects, such as altering blood flow, hormonal activity, immune cell responses, and metabolic activity, which may influence fatigue and subsequent recovery from exercise.

So then, is ‘taking the plunge’ worth it? After all, those who’ve tried it know it isn’t too comfortable!

Well, there is some (albeit mixed) evidence that ice baths may promote faster recovery of performance after exercise.

In the long-term, though, regular post-exercise ice baths do not seem to further improve performance. In some instances, regular ice baths may negatively influence responses to resistance (strength) training in particular.

This suggests that while ice baths may improve short-term recovery, they don’t seem to increase the benefits of exercise alone in the long term, and may be counterproductive to certain exercise goals.

Put simply. Compression garments apply mechanical pressure to the body, which could theoretically have various effects on the body, such as increasing skin temperature and blood flow and altering blood markers such as lactate or glucose. The use of these garments could also have perceptual benefits, such as on levels of perceived effort during exercise or muscle soreness and stiffness after exercise.

So then, what does the evidence say? In short, there is mixed evidence on whether compression garments benefit performance measures, such as time trial/race performance, jump, strength, or agility, when worn during exercise. But, no evidence wearing these garments harms performance.

Some studies suggest compression garments may increase local skin temperature, improve blood flow, and reduce muscle soreness and pain in the days after exercise. But they do not seem to make exercise ‘feel’ any easier (by having little influence on ‘ratings of perceived exertion’, or RPE, during exercise).

Similar to the effects on performance, compression garments are unlikely to negatively influence perceptions of effort, fatigue, or recovery, so their use may be justified depending on other factors (such as cost and comfort).

Active recovery, also known as a ‘cool down’, is perhaps the most well-known and widely used exercise recovery strategy.

This usually involves ~5-15 min of low- to moderate-intensity activity (such as water or land-based exercise or resistance exercises) within an hour or so of completing an exercise session or match.

Performing a cool down after exercise is often claimed to help recovery by aiding the removal of metabolic by-products (such as lactate) from the blood, reducing muscle soreness or stiffness, and helping to replenish metabolic fuels within muscles (such as muscle glycogen).

Using an active recovery after exercise could also have psychological benefits, such as perceptions of recovery and improving sleep. For some athletes (those in team sports in particular), the active cool-down may serve other potentially important functions, such as an opportunity for debriefing and team bonding after a competitive match.

Perhaps surprisingly, there is very little evidence that ‘cooling down after an exercise session benefits sports performance, either later the same day or the following day, although some small positive effects have been reported.

There is also no evidence that an active recovery can help prevent injuries, although it probably doesn’t harm long-term adaptations to exercise.

All in all, there is little direct evidence to suggest active cool-downs have any of the main benefits many people undertake – so are they worth the extra exercise time?

Well – most people seem to believe that an active cool-down is better than a passive cool-down – and the evidence suggests that one’s belief in a recovery intervention can influence its effects.

Stretching is frequently performed after exercise and often as part of the active cool-down.

Some of the main reasons that stretching is performed after exercise are the belief that it will reduce muscle soreness and increase joint range of motion (i.e., reduce stiffness). In contrast, pre-exercise stretching is widely believed to reduce the risk of injury and improve performance.

Despite this, current evidence suggests that stretching before or after exercise does not reduce muscle soreness.

Stretching can positively reduce stiffness and increase flexibility/range of motion, but often these factors may not benefit performance. For example, long-distance runners with a better running economy (defined as the rate of oxygen consumption at a given sub-maximal running speed) are less flexible, and since running economy is a key performance measure in runners, increasing the flexibility of these athletes could even hinder performance.

So although static stretching is perhaps one of the most widely-practiced recovery strategy, it most likely does not have a significant influence on recovery.

Foam rolling is an increasingly popular exercise recovery technique. It involves a type of self-massage where muscles are rolled and compressed using a foam roller (typically with the help of bodyweight) or a massage stick that can vary in density and hardness.

Like stretching, foam rolling is often performed as part of the cool-down (and also common during the warm-up) to increase range of motion and reducing muscle soreness.

Given the growing popularity of foam rolling, is it worth the extra time and effort? There is some evidence that foam rolling can help reduce levels of muscle soreness and increase range of motion after an exercise session, and it may also improve sports performance the following day.

Despite this, most of the current evidence is mixed, and further research is needed to determine whether foam rolling can facilitate aspects of exercise recovery.

While massage is often enjoyed for its relaxation benefits, it is also commonly used to remedy sore, tight, and fatigued muscles after exercise. The rapid increase in the popularity of self-massage devices – such as massage guns – has made massage even more accessible as a recovery tool.

But massage can be expensive and time-consuming – so is it worth it?

After exercise, massage has not been found to enhance recovery of various performance measures, including strength, jump, sprint, and endurance.

Some studies suggest massage may have a small benefit for reducing muscle soreness and improving flexibility after exercise.

The use of massage may therefore be warranted to alleviate muscle soreness and reductions in flexibility after exercise after weighing up the potential costs in terms of time and money.

Too much of a good thing?

While recovery strategies may be effective, it is important to recognise that in some situations, they may actually hinder some of the benefits of exercise.

As we discussed earlier, for instance, regular ice baths after strength training workouts can blunt improvements in muscle growth and possibly also aspects of muscle function, including levels of strength and power.

While not discussed in this article, anti-inflammatory medications are another common strategy to aid recovery from exercise, specifically to reduce muscle pain or soreness (known as NSAIDS or non-steroidal anti-inflammatory drugs). While these medications can reduce pain and inflammation, they have also been shown to blunt muscle growth when taken regularly during resistance training.

The reason some recovery strategies can disrupt some of the benefits of exercise relates to the concept of hormesis. Hormesis describes the idea that small doses of stress can positively affect living systems by promoting responses – or adaptations – that protect against future stress.

Each exercise session causes stress to our bodies, which promotes our bodies to respond and eventually adapt, culminating in the long-term benefits of exercise training such as improved aerobic fitness, strength, or muscle size.

So, in essence, if recovery strategies do their job too well, they may even interfere with the very things that promote the benefits of exercise.

Recovery strategies are commonly used to decrease muscle soreness and stiffness after exercise, prevent injuries and restore performance faster. Despite widespread use, many of these lack a solid evidence base for their intended benefits.

While some recovery strategies may not have established physiological benefits (such as effects on muscle soreness/stiffness or performance), they may have some important psychological benefits, such as improved feelings of perceived recovery or wellness.

It’s also clear that the effectiveness of recovery strategies can be influenced by the ‘belief effect’ (also known as a placebo effect) – whereby if someone believes that a recovery intervention will work, it probably will. However, recovery strategies may interfere with the benefits of exercise in some circumstances.

The potential benefits of recovery strategies must therefore be balanced with any potential risks or other factors such as cost, time, and inconvenience.

For those aiming for peak performance, then some recovery strategies are worth considering. But most of us are best suited to focusing on exercising consistently and not overdoing it during each session.

It’s important to realise that just because we are not sore or overly fatigued after an exercise session does not mean the session isn’t effective. With this in mind, the most underused recovery strategy might be not needing one at all!

The icons used in Figure 1 were made by Freepik, Flat Icons, surang, ultimatearm, and smashingstocks from www.flaticon.com.