Workplace disputes refer to situations in which two or more people come into conflict over a workplace issue and the matter remains unresolved. These disputes can be due to a range of factors, but the vast majority involve conflict over remuneration or workplace conditions. Most workplace disputes are resolved through informal discussions and negotiation, however when workplace disputes remain unresolved and escalate, they can have serious consequences for all stakeholders in the business due to costs, time delays and damage to relationships. In order to avoid these outcomes, it’s important for a business to look out for the early signs of conflict and have clear, fair and transparent processes in place to respond to any issues as they arise.

In Australia, the rate of workplace disputes that reach the level of industrial action such as strikes, has dropped significantly since the 1980s, and reached its lowest point in 2020 when COVID restrictions impacted work and action. However, as restrictions have begun to ease, the rate of workplace disputes has started to rise again. In the final quarter of 2021 there were 68 000 days lost to industrial action, according to the ABS. This is the highest level experienced since 2012, although this is still low compared to the heights reached in the 1970s and 1980s.

The following graph shows the number of days lost to industrial disputes between the 1980s and 2021. 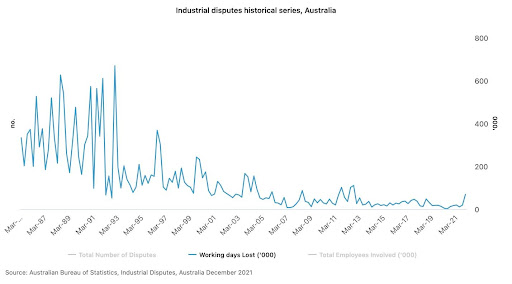 Why do workplace disputes occur?

Remuneration, which includes all pay such as wages, salaries and other entitlements, can be a source of dispute when workers feel that the amount they receive in remuneration does not match the changes in workload or meet increases in costs of living. While wages growth has been increasing at the fastest rate since the start of the pandemic, reaching 2.3% in 2021, it is still quite low and still behind increases in the cost of living, which rose by 3.5% during 2021 according to the ABS. This gap between pay and cost of living may contribute to pressure from workers for wage rises, and increase the risk of disputes over remuneration.

Conflict can arise over working conditions, with these disputes involving conflict over factors such as working hours, leave entitlements or specific employment conditions such as staffing levels and workload.

Conflict may arise when workers have concerns about reliability of current employment, and risks to their future employment. For example, workers may be concerned over the introduction of automation to replace workers, over reliance on casual employment or the risk outsourcing poses to their employment.

Workplace health and safety can become a matter of dispute if workers are concerned about the physical working conditions, access to protective clothing, equipment, training, or measures in place to protect workers from issues such as harassment.

Workplace disputes may be complex and can involve multiple issues as seen in the Chemist Warehouse case below.

In 2019 staff at Chemist Warehouse undertook strike action over concerns regarding job security and remuneration. The strike involved 800 workers in Queensland and Victoria and lasted 2 weeks. The National Union of Workers (NUW), representing the employees, alleged that employees at the distribution centres were being paid less than those working for competitors and that there was a high rate of casualisation leading to job insecurity concerns for many workers. This dispute was resolved when Chemist Warehouse and the NUW agreed on a new enterprise agreement that resulted in a significant pay rise of 8.75% immediately and casual workers who went on strike being offered permanent work. The NUW and Chemist Warehouse released a joint statement in support of the outcome. 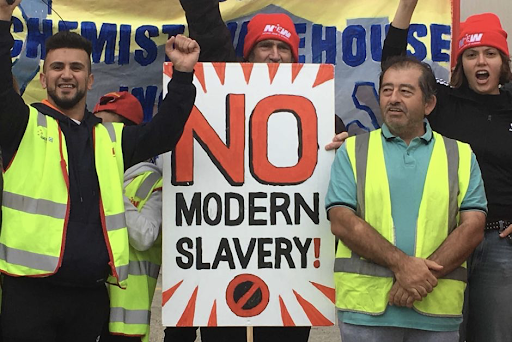 Managers should pay attention to early signs of conflict with employees in order to address issues early, to prevent a further deterioration. Early signs of a workplace dispute may be seen through an increase in complaints or reduction in motivation and participation in workplace activities, for example employees might stop engaging in meetings. Another indication could be a reduction in productivity with workers taking longer to complete tasks, rising absenteeism or changes in the behaviour of employees such as increased hostility. These signs might reflect growing employee dissatisfaction. Monitoring for these signs can help managers to engage with staff early to address concerns, and avoiding the issue becoming worse.

In June 2017, a five-year agreement between Cricket Australia (CA) and the Australian Cricketers’ Association (ACA) came to an end. At that time CA and ACA had been involved in negotiations to create a new agreement, however the negotiations had been stalled due to a dispute over proposed changes to pay for state and national level cricket players. Under previous agreements, cricketers had been given a portion of revenue on top of a salary. The new arrangement being proposed by CA was designed to remove the revenue-sharing model for most players, and only retaining it for the top international male cricketers. CA argued they were offering large pay rises in place of the share of revenue, and the ACA argued that the revenue sharing model should be retained for all players. When the June 30 2017 end date of the agreement passed, negotiations had not achieved a resolution and 230 cricketers fell out of contract and were effectively unemployed. As the dispute progressed with no agreement being reached, the Australia A tour South Africa was cancelled, and a tour of Bangladesh as well as the Ashes were at risk of being cancelled. The longer the dispute went on and the more these games were at risk, the more the cricket-viewing public itched for a resolution. The ACA argued the issue should be resolved through mediation, and CA argued instead that the matter should be dealt with through arbitration. After 10 months of negotiation and the players being out of contract for 33 days, the matter was resolved through negotiation and a new agreement was reached which included a modified version of the revenue-sharing pay agreement.

Most workplace disputes will be resolved quickly, through informal processes. However if the matter escalates it is important that businesses have clear, fair and transparent grievance procedures in place to try to resolve the dispute and prevent any further deterioration. A grievance procedure policy should include processes for how to raise complaints, and mechanisms for resolving the dispute as quickly as possible.

If the matter can’t be resolved through negotiation within the workplace, it may need to be resolved by involving an independent third party to mediate, and if that fails then the issue may be escalated to a court or tribunal to help resolve the matter through conciliation, arbitration or court proceedings.

Negotiation involves the parties involved in the dispute participating in discussions. The negotiation stage is an important opportunity for both parties to reach a solution quickly.

Involvement of courts and tribunals

Conciliation is similar to mediation; however the third party has a greater role, including providing advice and making recommendations. The disputing parties may request involvement of the Fair Work Commission who can provide a conciliator to assist the parties in resolving the dispute. Conciliation is a more formal process than mediation and negotiation, and while the parties have an obligation to attend the meetings, outcomes reached are not legally binding (until they are formalised into an enterprise agreement in the case of enterprise bargaining).

In instances of a severe or long running workplace dispute, the matter may be referred to arbitration to try to resolve the dispute. The matter may be heard through the Fair Work Commission by an arbitrator who is an independent party who listens to the arguments presented by both sides, with a key difference from conciliation being that the decision made by the arbitrator is binding on all parties. As a result of this, it is often in the best interest of both sides to try to resolve their matter through other means before considering arbitration.

Taking a dispute to court is very expensive and time consuming, and it’s important for parties involved in a dispute to be aware of the potential consequences before making the decision to pursue this path. Disputing parties may apply to have their matter heard in state or federal courts. The courts can make a range of orders to address disputes and in instances involving industrial action, the court can order an injunction to prevent further industrial action from being taken, as well as determine any damages to be paid. Decisions made by the court are binding.

In 2020, Qantas outsourced the jobs of 2000 ground crew workers. Qantas argued that this was a commercial decision, taken in response to the financial hit that the business had suffered due to the onset of the pandemic. The Transport Workers’ Union (TWU) alleged that the decision was motivated by most of the workers being union members. The TWU argued that the decision was in breach of the Fair Work Act 2009 (Cth), which prevents employers from taking “adverse action” against employees due to their union membership. The TWU took the matter to the Federal Court. The court largely found in favour of the TWU, as the court was not convinced that union membership didn’t play a role in the decision to outsource the workers’ jobs. However, the court has since determined that the workers are not entitled to be reinstated, and has not made a decision yet on compensation. Qantas has also indicated it intends to appeal the decision, so it remains a case to watch.

2. Look at figure 1, which shows the rate in industrial disputes in Australia between 1985 and 2021, and answer the following:

3. Create a mind map of the different factors that can lead to workplace disputes.

4. Imagine you’re the manager of a small business and you’ve noticed that staff are increasingly arriving late, leaving early and very few are attending the weekly check in meeting. Propose a strategy outlining what you might do to address this issue and re-engage the employees.

5. Explain the difference between negotiation, mediation, conciliation and arbitration.

6. Using information on the Fair Work Commission’s website (fwc.gov.au), explain the role that it plays in resolving workplace disputes.

7. Recreate the following table and use the information in the case boxes to fill it in. Conduct further research into each dispute and add additional facts into the table.

8.EXTENSION: Qantas was at the centre of one of Australia’s most significant recent workplace disputes in 2011. Research the 2011 Qantas dispute and explain what occurred, the impact the dispute had on different stakeholders and how it was resolved.

Janda, M and Pupazzoni, R “Wages growth is starting to pick up, but workers like Linda feel left behind as living costs rise faster” ABC news 23/02/2022

Khadem, N “Qantas workers who lost their jobs due to outsourcing will not be reinstated, Federal Court finds” ABC news, 17/12/2021

Ramsay, A “Arbitration call brings pay dispute to a head” 27/07/2017 available at cricket.com.au

Schneiders, B “Stunning win for Chemist Warehouse workers on both wages and labour hire” the Sydney Morning Herald, 28/03/2019