Why map the Great Barrier Reef?

The Great Barrier Reef (GBR) Marine Park covers an area of 344,400 km2, which is larger than the states of Tasmania and Victoria combined! As the world’s largest coral reef ecosystem, it consists of not just one reef as its name might suggest, but around 3,000 individual reefs. The sea country of some 70 Indigenous Traditional Owner groups intersects with the region, and it supports many thousands of marine species. The GBR and is recognized globally as a World Heritage Area for its biodiversity and cultural significance, and it contributes an estimated $6.4 billion to Australia’s economy through tourism, fisheries, and other commercial ventures. So it’s a pretty significant and special part of our planet!

However, in light of global concerns related to climate change, the health of the GBR and even its World Heritage status may be in jeopardy. Climate change related increasing sea surface temperature is a considerable threat to reef health due to the thermal tolerance thresholds under which corals are able to live. The increased water temperatures have triggered a number of mass coral bleaching events over the past two decades, often leading to major coral mortalities, and a shift from coral dominated to algal dominated reefs. Using maps to document baseline reef status and their changes over space and time forms critical information for sea country managers, providing quantitative measures to assess the impacts of climate change and any management interventions.

What types of things can we map?

There are many different components of the GBR and its ecosystems for which maps are useful. Some scientists and managers would consider mapping the amount of coral, algae, and other habitats on the reef to be their Holy Grail. Others are interested in the three dimensional structure of the reef, its complexity and bathymetry. Given the importance of water temperature and its relationship to reef health, there is also a lot of work mapping temperature and circulation throughout the reef. With so many diverse applications there are equally diverse data and techniques required to serve them. Let’s explore some case studies for some more detail.

To understand coral cover on the GBR, we need to get up close and personal! This is because we need a high level of detail in the data that we capture to see where the living and dead coral are. We often conduct surveys in the water – either snorkeling or diving – to document the different types of coral, other habitats, and the critters that live there. Typically snorkelers and divers will take lots of photos, as well as making notes on underwater slates (Figure 1). They will often also tow a GPS in a water proof bag along the surface to record the locations they surveyed. The GPS information can be later combined with field notes and photos to make a map of areas visited. 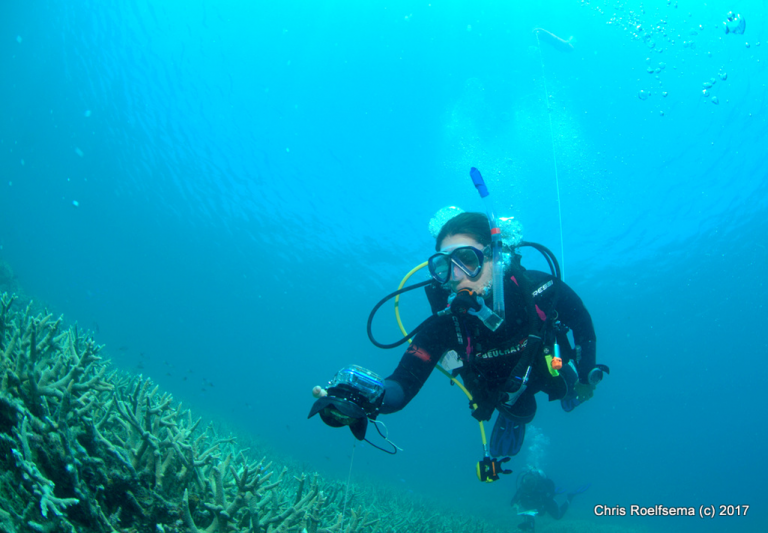 Figure 1: Diver tows a GPS while taking photos of the coral habitats. Photo provided by and © C.Roelfsema

While we can use in-situ surveys to map coral cover, this method is limited by the amount of area that that a diver or snorkeler can swim at any one time. Drones offer an alternative method and still provide incredible detail in shallow, clear water. There are many off-the-shelf drones available now with excellent cameras, and freely available software to create a flight path for the drone to cover. The drone uses its on-board GPS to fly multiple parallel lines, capturing hundreds of overlapping photos as it flies. We then use software to ‘stitch’ the photos together into a map for further analysis.

It’s important to recognize that in most cases it is the combination of different techniques that allows us to tell the whole story of any given environment. Figure 2 helps to demonstrate the value of data sets acquired with different levels of detail and area covered. For example, in Figure 2a, you can clearly see the entirety of Heron Reef in the southern GBR using this satellite image. However in Figure 2b-c, with the satellite image as a backdrop behind drone imagery, the lower detail of contained in the satellite data becomes apparent, while individual coral colonies can still be seen with the drone. In Figure 2d, the context of different corals within the reef matrix is clear, but it is no substitute for the detail detected with in-situ photography (Figure 2e). Yet of course in-situ photography covers only a small fraction of the reef, as indicated by the sample points in Figure 2b-c. Unfortunately it would take far too long to capture data over the entire reef using a drone or in-situ sampling, so despite the lower amount of detail in satellite data, it remains a staple component of mapping the Great Barrier Reef. 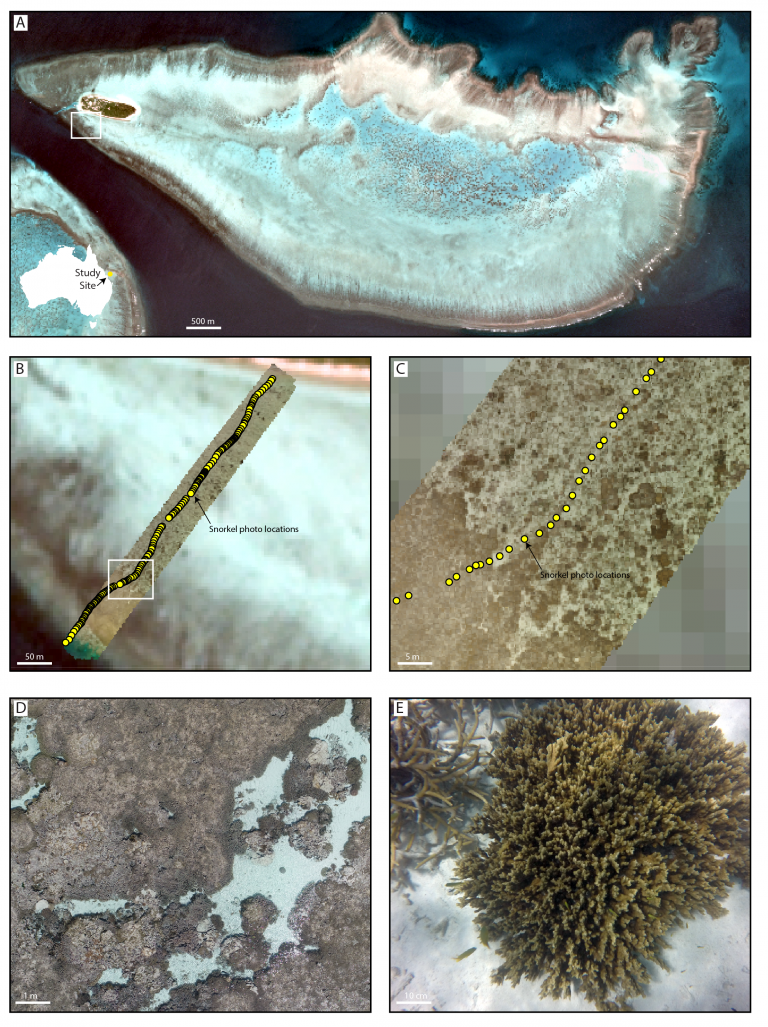 Satellites are one of the most commonly used technologies to study the physical shape or structure of the reef, also known as reef geomorphology. This is largely driven by wind and wave exposure on and within the reef. Individual reefs can be broken into a number of different geomorphic zones, and these in turn can be used to predict habitat biodiversity. For example, there is often a lot of live coral found on reef slope areas, while reef flat areas are more likely to be sediment dominated. So if you want to go to the best dive spots, head to the reef slope! 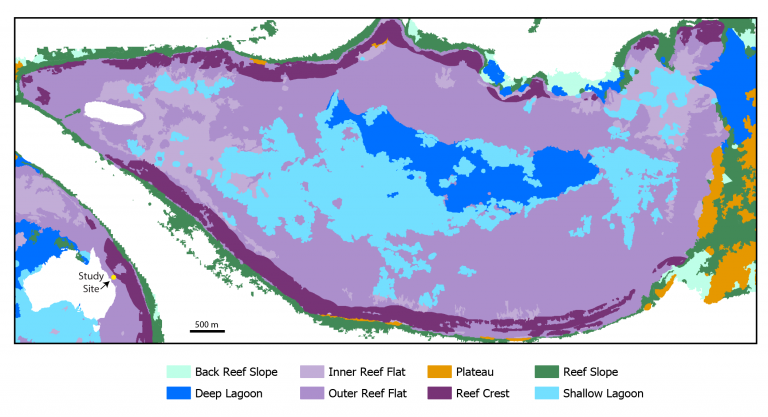 Figure 3: An example of the different geomorphic zones on Heron Reef. Geomorphic data are © 2020 Allen Coral Atlas Partnership and Vulcan, Inc. and are licensed CC BY 4.0 (https://creativecommons.org/licenses/by/4.0/)

When characterizing reef geomorphology, we take into account the bathymetry which allows us to calculate water depth and also the slope of underwater structures. Bathymetry is like underwater elevation (Figure 4). There are many different techniques used to map bathymetry using sensors deployed on satellites, aircraft, and boats. When the water is clear and shallow, it is possible to detect underwater features using light or lasers (e.g. LADS or Laser Airborne Depth Survey, or LiDAR – Light Detection and Ranging), however in deeper or turbid waters, the best option is to use sound waves or SONAR (sound navigation and ranging). Even many recreational boats will have some form of SONAR on board to alert their driver of shallow areas or obstacles, or even to help find fish. However the SONAR devices used for mapping capture data over large swathes of the sea floor. 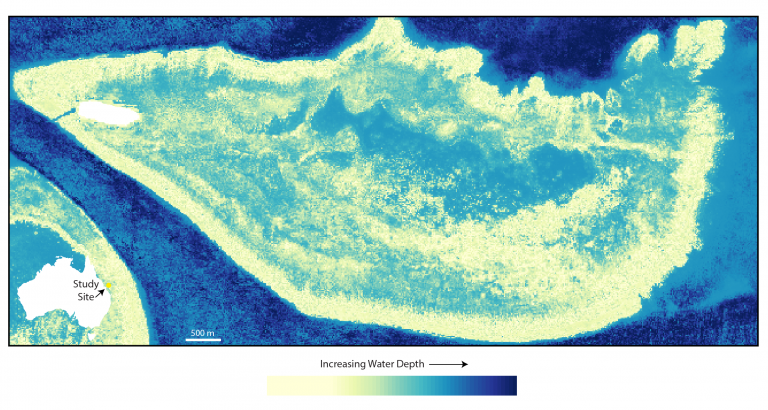 It is extremely difficult to obtain information about water temperature for a single reef, due to the resolution of the satellites that have thermal sensors onboard. Instead we tend to look at the GBR as a whole to understand how temperature varies over broad areas. Satellites measure the temperature emitted from surfaces, and this is termed the ‘skin’ temperature of the ocean. Unfortunately this is not always a good indicator of the temperature at depth, as vertical currents have a role to play in temperature variability as well. Nonetheless, we can still learn a lot about the horizontal currents and variability of the GBR using the skin or sea surface temperature.

In Figure 5, you can see the difference in water temperature between summer and winter (Figure 4 a and b respectively). Not only is summer unsurprisingly considerably warmer, but the intricate patterns of circulation are different as well. It is difficult to tell at this resolution, but the East Australian Current brings warm water down through the Great Barrier Reef, like you might have seen on Finding Nemo. It is this type of satellite data that scientists use to look at water body movement patterns in La Niña and El Niño years, as well as predicting areas susceptible to coral bleaching. 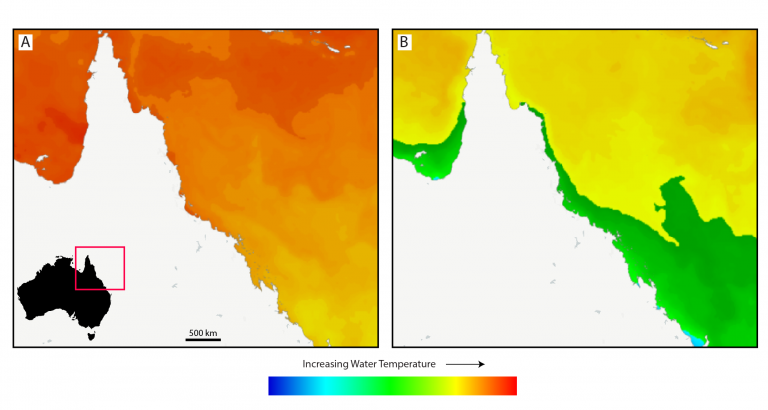 Figure 5: Sea surface temperature patterns around the Great Barrier Reef and surrounds from (a) 25 Dec 2020; and (b) 25 June 2021. Data provided courtesy NOAA Coral Reef Watch via the Allen Coral Atlas

The Great Barrier Reef is a complex ecosystem of significant global importance. As such, the ability to map and monitor its components is critical for sea country managers who are tasked with the mammoth job of maintaining her health, beauty, and diversity for future generations to enjoy. From simply knowing where the individual reefs are, through to finding the answers to more complex questions about habitats, structure, and water circulation, it’s important to choose the right tool for the job. No one data set will provide all the answers, but it is in the integration of data where we can begin to discover true wisdom.

1. Investigate the ‘Coral Reefs at Risk of Bleaching’ dashboard and describe the patterns of risk that are evident with the presented data. Which areas are most at risk and why? How do you think these patterns might change over the course of a year? (https://bit.ly/3CSJedI)

2. Use the Allen Coral Atlas to view satellite imagery, benthic habitats, and geomorphology of the Great Barrier Reef. What are the most common benthic habitats? Where is most of the coral and algae found? Why are these two classes grouped together? (https://allencoralatlas.org/)

3. Use GeoNadir to find drone image collections around the Great Barrier Reef. Compare and contrast the amount of detail that you can see in these datasets with those in the Allen Coral Reef above (https://www.geonadir.com/).

4. Use the Allen Coral Atlas to view the Coral Reef Watch sea surface temperature products. Experiment by changing the date of the data layers and discuss the spatial and temporal trends that you can see in these data (https://allencoralatlas.org/)

5. Read more about the different technologies used to map underwater environments and create a table detailing the benefits and disadvantages of each technique (https://www.deepreef.org/technology/52-lidar.html).