ARE LOW-INTEREST RATES UNFAIR AND UNDESIRABLE

Interest rates are currently almost zero. This is bad news for retirees depending on interest income. But it is necessary to avoid higher unemployment. On balance, lower interest rates tend to help low-income people more than they hurt them. The Reserve Bank is doing what it can to alleviate poverty, but the Government could do more.

Phillip Lowe, the Reserve Bank governor, gets many letters and emails from retirees complaining that they cannot live on the interest from their savings when interest rates are so low. He replies to all of them – or at least the polite ones. Essentially the retirees are ‘collateral damage’. They are being unintentionally hurt. The Bank has only one instrument it can use to stimulate the economy, and that is low interest rates.

Central banks such as the Reserve Bank of Australia, the European Central Bank or the US Federal Reserve have set interest rates at historically low levels in recent years. Since the Covid pandemic and associated lockdowns, interest rates have come down even further, to (almost) zero. In some economies, there are even negative interest rates.

Economists are concerned about inequality. Inevitably some people will have lower incomes than others. But if the differences are too great, those at the lower end of the income distribution will be regarded as in poverty. Absolute poverty refers to being unable to feed, clothe and house yourself adequately. Relative poverty refers to being unable to participate in activities that most people in the community take for granted. A benchmark for relative poverty is an income of less than half the median (average) income of the community.

Inequality has an ethical dimension. Too great a difference between the rich and poor is regarded as ‘unfair’. But it also affects economic performance. Studies have shown that economies that are unequal perform worse.

In Australia, there has been a modest increase in inequality in recent decades. Incomes have grown faster for those on high incomes than for those on low incomes. But in percentage terms, the differences have been small. (Chart 1) 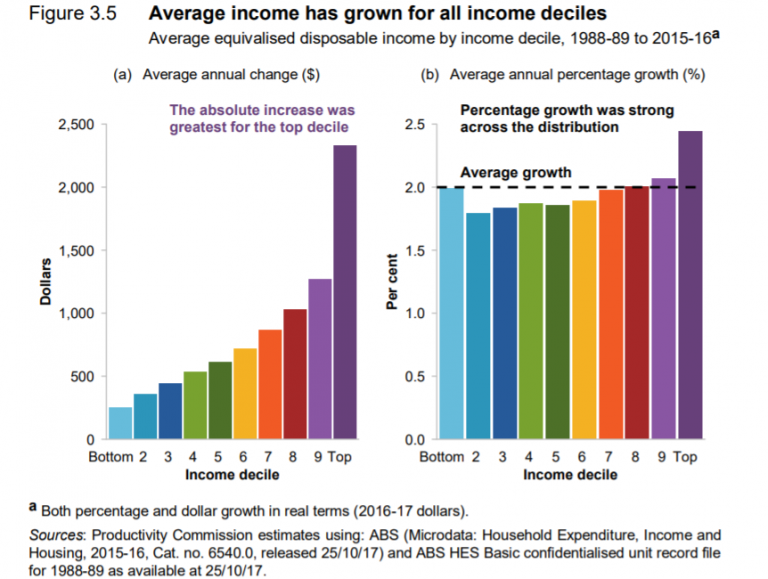 There have been claims that low-interest rates are increasing inequality. Poor retirees get little or no interest in their bank accounts. But the low-interest rates have driven up share prices and house prices, making the wealthy richer. When central banks engage in ‘quantitative easing’ – buying bonds – they may add to this effect.

(In some countries, such as the United States, after the 2008 financial crisis, central banks have had to bail out banks. This has been seen as an even starker example of favouring Wall Street over Main Street.)

The Bank for International Settlements is the global expert on monetary policy. In their latest Annual Economic Report, they examine whether central bank policies have been increasing inequality. The BIS concludes that since around the 1980s, the gap between the rich and the poor within individual countries has indeed widened. The Covid recession has exacerbated the trend. But they conclude it was not due to low-interest rates.

What has increased inequality?

Among factors that have contributed to longer-term increases in inequality are technological progress, globalisation and decreased unionisation.

Globalisation refers to the increased international trade of goods and increasingly services. An example is call centres being moved offshore. This erodes the bargaining power of low-skilled workers and small businesses.

The reduction in membership of trade unions has also been a factor as it has reduced the bargaining power of low paid workers.

The Covid pandemic and lockdowns have further exacerbated inequality. The most affected areas of the economy include those services which cannot be provided remotely (such as hospitality), which employ many low-paid workers.

So what should the Reserve Bank do?

Unemployment is an important – perhaps the most important — driver of income inequality. It is often lower-paid workers that are the first to be laid off in an economic downturn. Once they lose their job, workers’ incomes drop markedly. In Australia, the unemployment benefit is well below even the minimum wage.

The Reserve Bank responds to economic downturns by trying to minimise the increase in unemployment. It does this by lowering interest rates. Lower interest rates mean consumers have less reason to save, so they spend more. Businesses are more likely to borrow to invest. The exchange rate will be weaker, making exporters and import-competing firms more competitive. All this helps create more jobs.

Where the Reserve Bank does not lower interest rates during a recession, more people would fall into poverty due to losing their jobs. Income inequality would increase. (The impact on wealth inequality of lower interest rates is less clear. It will depend on how much the price of houses and apartments – owned by about two-thirds of the population – rises compared to the price of shares – owned mainly by high-income earners. But as the poorest households tend to own neither houses nor shares, they will be relatively worse off.)

Concerns about inequality may be one reason some central banks have altered their monetary policy framework to allow more employment growth. In the US, the Federal Reserve has explicitly said it would tolerate a period of inflation above its long-term target, given the recent period of inflation being below the target. The Reserve Bank of Australia has more subtly done something similar. They recently announced that they would not increase interest rates until actual inflation is back within the target range, not just forecast inflation. This implies a greater willingness to accept a short period of inflation overshooting the target.

Central banks may be able to help reduce inequality through some of their other roles. They can also promote financial inclusion and consumer protection. They can help develop a more efficient payments system. All these sorts of measures help the poor. The Reserve Bank of Australia has been acting on these fronts.

What could the Government do?

Governments can help address inequality by providing more and better education and training. They can place a floor under wages by increasing unemployment benefits and supporting increases in the minimum wage.

The Government could also reduce inequality with changes to taxes and benefits. Currently, it is planning to introduce the ‘stage three’ tax cuts, which will cost about $20 billion a year. They will mainly benefit higher-income earners and so increase inequality. (Chart 2) Inequality would be reduced if they were replaced with higher unemployment benefits and tax cuts for low-income earners. This would have the additional benefit of providing more economic stimulus, as low-income earners are more likely to spend the extra income. 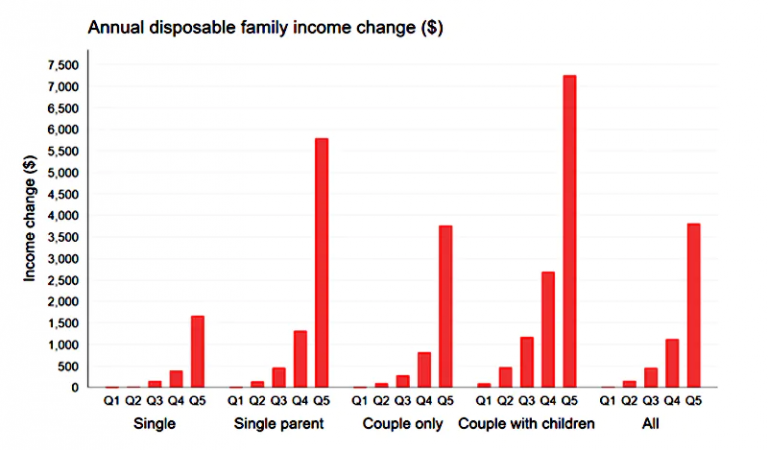 1. If you were the Reserve Bank governor replying to a pensioner’s letter, what would you write?

2. Do you think it would be a good thing if every person in Australia had the same income?

3. How much higher should the CEO’s pay of a large company be than the pay of the most junior employee?

4. Should the Government increase the unemployment benefit? If so, by how much?

5. What percentage of the median income of a society should be the minimum that anyone has to live on?

6. Which countries do you think have less inequality than Australia? Which have more? Why?

7. What do you think are the main factors increasing inequality?

9. Should the Government amend its plans for the ‘stage 3’ tax cuts?

On this topic in general: theconversation.com/are-low-interest-rates-increasing-inequality-no-says-the-worlds-central-bank-163480

On the impact of inequality on economic growth: www.oecd.org/newsroom/inequality-hurts-economic-growth.htm

On the distributional impact of the ‘stage 3’ tax cuts: theconversation.com/the-low-and-middle-income-tax-offset-has-been-extended-yet-again-it-delivers-help-neither-when-nor-where-its-needed-160772